I Got Slapped in the Face by My Own White Privilege, and It Made Me Want to Be Better 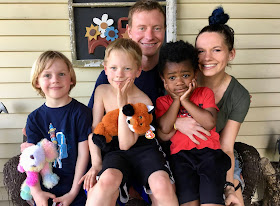 I have a somewhat embarrassing confession to make: I didn’t know the details of what happened to George Floyd until about four days after the fact.

I know what you’re probably thinking: How is that even possible? It seems like EVERYONE is talking about it.

But you see, here’s the thing: I wasn’t entirely ignorant. I knew that something tragic had happened.

I saw the headlines.

I saw the photos.

I saw the rally cries, the Black Lives Matter hashtags, the petitions, the memorials, the brilliantly composed song lyrics, the faces—both black and white—painted with pain and outrage.

I saw the world burning. Literally, in some cases.

I “saw” all of it, but I deliberately chose not to SEE any of it.

I didn’t click on the news stories, didn’t watch the videos, didn’t engage in the discussion. I didn’t join my friends in their public outcries for justice. I avoided Facebook and news outlets. I didn’t ask my husband what he’d heard about it. I didn’t want to hear about it—or worse—think about it.

In fact, for days after the incident, I stayed in my safe little COVID-19 quarantine bubble. I sat around in my home, reveling in the familiar comfort of my favorite bathrobe and house slippers. I sipped my coffee, played with my kids, and forcibly repressed my curiosity whenever it began wandering into dangerous territory. I intentionally chose the numbing bliss of unawareness.

Because I knew. I knew if I plugged myself back into the broken world we live in that it would hurt—that I would hurt. I knew once I read the details about what happened, I wouldn’t be able to get them out of my mind. I knew I’d feel lost in a sea of confusion, anger, sadness, and helplessness. I knew it would leave me feeling unsettled.

At the risk of sounding juvenilely simplistic, I knew that facing the reality of everything would make feel “yucky” inside.

So I delayed the inevitable for as long as I reasonably could. I avoided awareness. I avoided truth. I avoided pain. I put off the discomfort until I felt a little more emotionally prepared to face all that heartache and ugliness.

And that’s when the realization slapped me in the face: THAT—that luxury of avoiding and delaying all those “yucky” feelings—is just one example of my white privilege.

There are people out there who wake up with that “yucky” feeling every damn day simply because they happen to have more melanin in their skin than I do.

There are people who have to function in a state of relentless emotional exhaustion all the time.

There are people who worry about the safety and security of their family and friends every minute of every day.

There are people who walk out into the world on a daily basis feeling like “the underdog.”

There are moms who have to weigh the risks and benefits of allowing their kids to play outside unsupervised.

In fact, when my own black son—who is now “adorable” but already “big-for-his-age”—gets older, I will become one of those moms. There will be a day, a few years down the road, when I’ll have to explain to him why he can no longer play with nerf guns outside of our home. I just pray I have the wisdom to handle it with as much grace as possible.

Coming face-to-face with your own white privilege is not a pretty thing.

In fact, it's rather ugly. It can make you feel embarrassed, ashamed, and futile. I don’t think any decent human being likes knowing that there are people out there who have it “so much worse” than they do. It’s just another one of those things that makes you feel kind of “yucky” inside.

But you know what else it is?

That awareness is one of the driving forces behind beautiful and altruistic things like homeless shelters, food pantries, foster care, and mitten trees at Christmas time. It makes us want to be better. It sparks positive change.

In fact, as life coach Tony Robbins once said, “All growth starts at the end of your comfort zone.”

We owe it to one another to acknowledge and face our minor discomforts, like white privilege, in order to spare our brothers and sisters from the major ones—the tragedies, like what happened to George Floyd and countless others before him.

I’ll admit, I am still figuring out exactly how I—as a privileged white woman—can be better. But here are some things I do know:

Choosing to be aware of my own privilege and allowing myself to acknowledge the pain and injustice around me is a good place to start.

I also know that as a Christian, I am supposed to hold Jesus’s words—“Love one another as I have loved you”—as the greatest commandment. Jesus advocated most often for the frightened, the poor, the lost, and the oppressed. I am going to strive to love as He did.

And finally, I know that as a mom, I have perhaps the greatest power—and concurrent responsibility—to heal this world with both awareness and love. I can raise my children to do better, to love better, and to be better.

Because at the end of the day, what I want most is a better world.

For all of us.